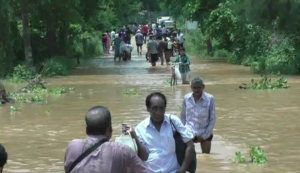 Jajpur/Kendrapara: Thousands of people remain marooned in different parts of Jajpur and Bhadrak districts in Odisha despite the water level in the Brahmani River coming below the danger level on Monday.

Over 30,000 people in nine blocks of Jajpur district, including Jajpur, Binjharpur, Rasulpur, Danagadi and Bari, are marooned in flood waters, while as many as 15 gram panchayats, including Atira, Bhurunga Kimbhirpala, Malda, have been completely cut off with the mainland of Bari block , the worst affected area in the district.

Similarly, the overall flood situation in Kendrapara district continued to be grim today though the water level in major rivers Brahmani and Kharasrota is receding. Around 20, 000 people in seven blocks of the district, including Patamundai, Aul and Rajkanika, have been stranded in flood waters.

Rescue and relief operations have been expedited in these flood-affected districts.

NDRF, ODRAF and district officials are engaged in rescue work. The evacuated people have been shifted to flood shelters, schools and other public buildings.