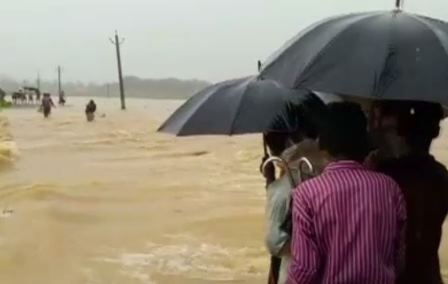 Nabarangpur: After Rayagada and Kalahandi districts, Nabarangpur district was hit by flash floods on Monday evening.

Thousands of people of around 25 gram panchayats in the district have been marooned by the floods caused after Bhaskeln, Turi and Petaphula rivers overflew following heavy rains in the district last night.

According to sources, the district, which has been experiencing rains for the past five days, received very heavy rains last night which caused increase in the water levels of the rivers.

Road communication to 25 panchayats of Kosagumuda, Nandahandi and Papadahandi blocks have been severely hit as flood water is overflowing on the roads, including NH-26.

Police personnel have been deployed at places where floodwater is flowing 4 to 5 feet above the roads to advise people not to commute on the roads and thus avoid any untoward incident.