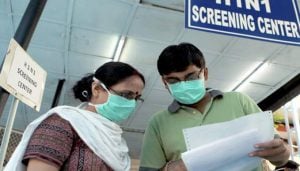 Bhubaneswar: In the first reported attack of the disease this year in Odisha, as many as five persons have tested positive with the dreaded H1N1 virus here in the capital city.

All of them have been admitted to a private hospital in the city after July 25. They are now getting treatment in the isolation ward of the hospital.

Their blood samples were sent to Regional Medical Research Centre (RMRC), which found them  H1N1 positive.

Out of the five patients, four are women. Two of them belong to Bhubaneswar while the rest are from Kalahandi, Jagatsinghpur and Balangir districts in the state.

Swine Flu is an infection caused by any one of several types of swine influenza viruses including H1N1, H1N2, H2N1, H3N1, H3N2 etc. Symptoms of this disease include fever, cough, headache, sore throat, body ache, dizziness, abdominal pain and fatigue.