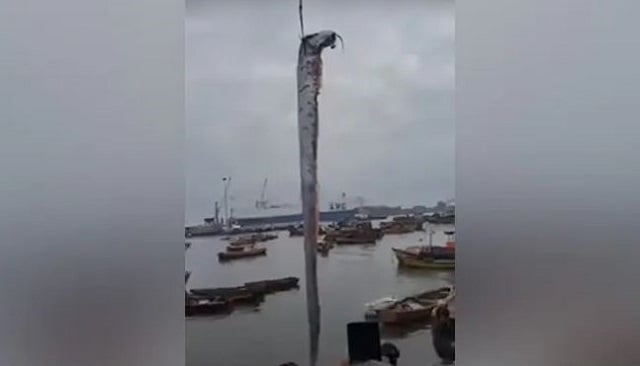 A group of fishermen pulled out an incredible 16 ft long monster fish in Chile and the video is currently going viral on social media.

The clip shows the long, bony fish being hooked on the head as the fishermen transferred it to the land. The fish has been identified as colossal oarfish, it is also known as rowing fish.

The locals in Chile consider it to be a bad omen” for earthquakes, and other natural disasters.

The occurrence of the colossal-sized oarfish is raising concerns among locals as the deep-water creature is traditionally considered a bad omen for tsunamis and earthquakes. A large number of these fish were seen in the waters around Japan and found dead on its beaches around the time the 2011 Fukushima earthquake hit.

“That’s a scary amazing fish,” wrote one user, while another explained the concerns of the locals saying, “Oarfish live in the depths. It is said that when they start to the surface it is because the tectonic plates are in movement.”

Oarfish can reach lengths of up to 11 metres. They usually live in deep water and only return to the surface when they are sick, dying or breeding.