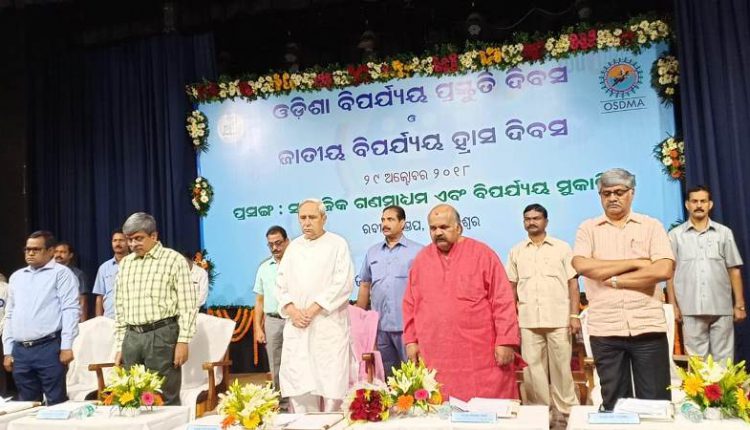 Notably, the state government has set up 122 alert towers in the coastal line of the state to give early warning on the risk in impending Tsunami and cyclone and flood.

Addressing the occasion, the Chief Minister appreciated the commendable job done by the response forces, public officials, elected representatives, non-government organization and volunteer in saving the souls during Very Severe Cyclonic Storm Titli and subsequent floods, and relief and restoration to bring back life to normalcy in the immediate aftermath of the disaster.

Patnaik also admired the continuous efforts of the Odisha State Disaster Management Authority (OSDMA) for capacity building at various levels, creating mass awareness and bringing the latest technology and best practices for strengthening early warnings and decision support system for better management of disasters. He also expressed concern due to frequency of natural disaster across the world due to climate change.

The CM also announced the programme for preparation of Village Disaster Management Plans (VDMPs) in 7000 villages in the first phase to build resilient community and to undertake a study on the vulnerability of landslides in Gajapati district for taking up preventive measures for loss of lives and property due to the disaster in future.

Chief Secretary Aditya Prasad Padhi, SRC Bishnupada Sethi and others attended the special programme organized by the OSDMA with a theme Social Media and Disaster Response.

The Disaster Preparedness Day and the National Day for Disaster Reduction is observed on October 29th every year to commemorate the destruction brought by the Super Cyclone 1999.

On the 19th anniversary of the #Super #Cyclone which is observed as #Disaster #Preparedness #Day in #Odisha, CM @Naveen_Odisha said, “First time in the history of Odisha, we had a phenomenon of unprecedented landslides, leading to loss of life and property”(#Gajapati district) pic.twitter.com/7AmI5LyLnz

Tigress Sundari to be shifted to Nandankanan: Odisha Minister