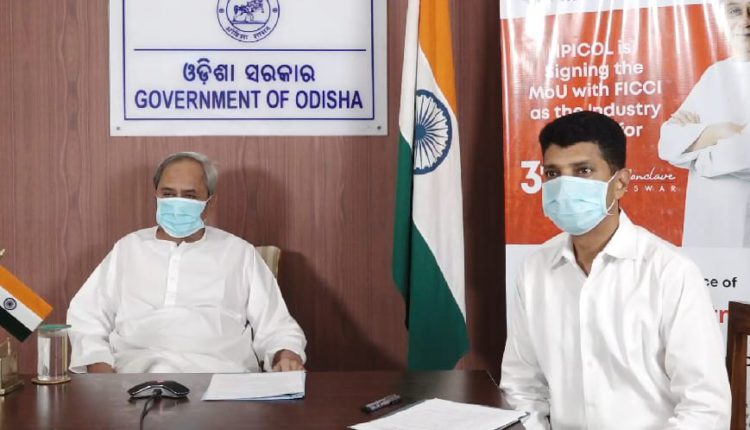 Bhubaneswar: The Odisha government on Tuesday signed an agreement with the Federation of Indian Chambers of Commerce and Industry (FICCI) as the state’s  national industry partner for the third edition of  ‘Make in Odisha’.

The MoU was signed on a virtual platform, in presence of Chief Minister Naveen Patnaik between the state owned Industrial Promotion & Investment Corporation of Odisha Limited (IPICOL ), and FICCI for investment promotion and investor outreach activities to be undertaken leading up to the next edition of ‘Make in Odisha’ Conclave.

Speaking on the occasion,  the Chief Minister said that the positive policy framework, robust infrastructure, skilled human resources and result oriented administrative set up will help Odisha realizing this vision.

He added that the Five-T Initiatives have brought about a change in Governance and making significant contribution to the overall industrial ecosystem of the state.

With the signing of this MoU, he expressed confidence that the state will take the next leap in terms of industrial growth and development.

Welcoming FICCI as National partner, the Chief Minister said that the Make in Odisha Conclaves in 2016 and 2018 brought in significant increase in the quantum of new investments resulting in creation of a diversified industrial base in the State, and as an outcome, the state has established itself as one of the premier investment destinations in the country.

Highlighting the state’s superior performance as an attractive investment destination despite COVID -19, the Chief Minister said that even during these trying times; Odisha has undertaken various investment promotion activities and leveraged digital technology to reach out to the investor community.

This is evident by the fact that the state has attracted over Rs 24,300 Crore worth of new investments since February 2020, he informed.

Wishing the partnership a great success, the chief minister said that the initiatives implemented by various Departments have led to expeditious implementation of industrial projects in the state.

He added that over 60 percent of these investment proposals are in various stages of implementation.

Highlighting the investment climate of Odisha, she said that Odisha has all the critical building blocks for success of the State.

The industries body is honoured to become the national partner and it will leave no stone unturned to make it a great success, she added.