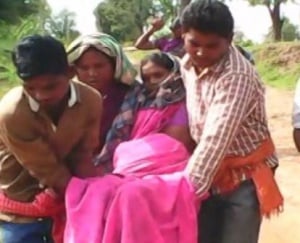 Umerkote: Health minister Pratap Jena has ordered a probe into the shocking incident of an expecting mother being carried on shoulders by family members for three kilometers to reach the hospital on Monday after 102 and 108 ambulance service failed to arrive in time despite desperate and repeated calls.

Family members of Damani Gond, a resident of Ramapada village in Umerkote region of Nabarangpur district, had called for 108 and 102 ambulance after she complained of labour pain. Since the ambulances didn’t come even after waiting for three hours, they carried her on their shoulder for nearly three kilometers to reach Tahara village and then hired a private vehicle to take her to the Community Health Centre (CHC), Umerkote.

“We dialled 108 as well as 102 ambulances repeatedly as she was suffering from labour pain. We waited for around three hours for the ambulance but they didn’t come. So we had no other option but to carry her on our shoulders,” said a relative of Damani.

Fortunately, Damani delivered a baby boy in the CHC without much problem. Both the mother and son were declared safe.

CDMO, Nabarangpur, Dr. Anup Ghosh has already ordered a departmental inquiry into the failure of the ambulance service in this incident. “Appropriate action will be taken against the officials responsible,” Dr. Ghosh said.

A local person claimed that though the government has introduced various programmes including “Janani Suraksha Yojana” for safe child delivery, people of tribal areas like us are unable to get the benefit of such government programmes.”