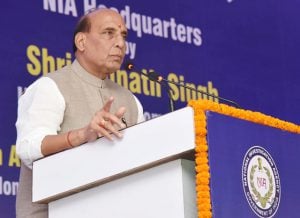 Inaugurating the new headquarters of the National Investigation Agency (NIA) here, the Home Minister stated no civilised country can accept the growth of terrorism on its soil.

He termed terrorism a “curse” that no civilised country can accept.

“Fake currency contributes to terror funding. The NIA is playing an effective role in curbing the flow of FICN and terror funding,” Singh wrote on Twitter.

Complimenting the NIA’s role in curbing terror acts in the country, the Home minister said that gathering evidence in terror cases was a challenging job and that in 95 per cent of such cases, the accused get convicted.

In eight years since its inception the NIA has earned people’s confidence and trust by conducting fair and credible investigations.

The NIA investigations have resulted into 95 % conviction rate. I’m confident that NIA will maintain its credibility & professionalism.

Singh also claimed that India has taken remarkable steps to highlight the menace of terrorism in the international forums. He said Prime Minister Narendra Modi had succeeded in bringing international community on board on the issue.