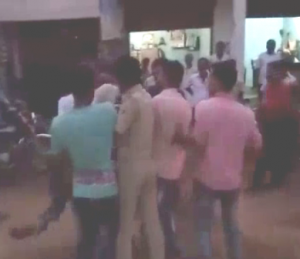 Soro: An Excise official has been brutally thrashed by a group of aides of a liquor trader at Soro court square here last night. The incident took place while the official was escorting the trader from court to Soro Jail.

The official,  identified as Prabhash Mohanty , was seen being chased and beaten up by a group of miscreants on the intervening night in a video clip available with Kalinga TV.

The attackers were also seen trying to snatch away the trader from the Excise custody, which was foiled by Mohanty. He was rescued from the clutches of the attackers by some locals later on.

Talking to media over the incident , Mohanty said the Soro Excise unit had arrested five liquor traders including Bichitrananda Behera of Markona market conducting raids in Khantapada, Soro and Markona areas on Thursday. A total of 7 litres bear and 3 litres foreign liquor were seized from Bichitrananda’s possession. The Excise Officials were on their way back from producing the arrested in court when the attack took place with an intention to get Bichitrananda escape, he added.

Being contacted over the issue Keshab Chandra Das, Soro Excise Sub Inspector said, “A probe has been ordered into the case and action would be taken on the guilty after it is completed.”