Every action has a reaction: Girl falls off bike after kicking another rider in new viral video 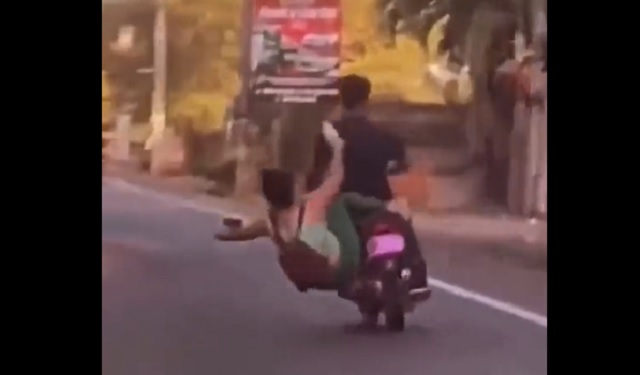 Internet has become the treasure house of various types of videos. You can find all type of videos on the internet including clips of babies, animals or humans doing hilarious things. Everyday some video attract the attention of the mass and goes viral on the internet.

Now, a new video of a girl is going viral online. The viral video shows a girl riding pillion on a motorcycle was trying to kick another bike rider that is driving close to her. The woman was actually aiming for another girl who is sitting on the bike. The kick could thrown the balance of the bike off that would have led to the fall of the riders and they could have been seriously injured. But, the girl’s kick did not even touch the bike so they avoid being hurt by a fraction.

However, the girl who was trying to kick the other rider lost her balance and fell off the bike and landed on the road. The man driving the woman then stops when he realizes that she fell off. The people who were recording the incident from behind in their car also stopped their vehicle when she fell.

Thankfully, the girl doesn’t seem to be injured and gets up from the road by herself. The video which was originally shared on Reddit. The video has garnered many reactions.

Man touches dancer inappropriately on stage, Then this…

100 kg wheel of plane falls off during take off in Italy,…

Netizens commented that the girl got instant karma for trying to harm another person. “INSTANT Karma,” a user commented. “Hahaha haha got what she deserved,” another user wrote. “That bag saved her back though,” a third user wrote.