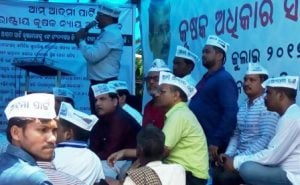 Bhubaneswar: Aam Aadmi Party leader Sanjay Singh, who was in the city to address a gathering of around 5000 farmers as part of the nation-wide Chashi Samabesh (farmers’ convention) today lashed out at the Modi Government for its anti-farmer policies.

“There is Mann ki Baat, anti-romeo ki baat, cow ki baat, but where is Garib ki baat, aam aadmi ki baat?” quipped Sanjay to the applause of the congregation.

“First they promised 50 per cent hike in MSP, then they spoke of increasing employment opportunities, bringing back black money and ending corruption but nothing has happened. They brought demonetization saying it will stop terrorism and Red extremism and now they have brought GST, where we have to pay more taxes. Modiji is a person who can even sell a comb to a bald person.”

Highlighting the achievements of the Aam Aadmi Party, he said the AAP Government in Delhi is the only Government which is not practicing dynasty politics and is working for the benefit of the common man.  The party has now started building its base in Odisha, he added.

“The Centre and the State Government are to be blamed for the sufferings of the farmers. AAP is slowly building a base in the State. We will take up all issues of the farmers here, including the closure of Deogaon sugar factory, which has rendered hundreds jobless,” he said.