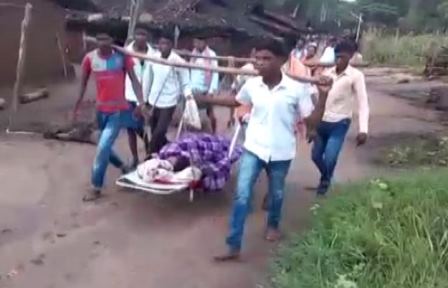 Bolangir: Making a mockery of the Janani Suraksha Yojana (JSY) yet again, a pregnant woman from Rameigad village gave birth to a dead child after being carried on a sling to the Bolangir District Headquarters Hospital (DHH) on Sunday. Locals blamed the death of the new-born on the administration’s inability to provide road connectivity to the village.

According to reports, the victim pregnant woman Khira Majhi reported labour pain at regular intervals since Friday and needed immediate shifting to the hospital. But in the absence of a motorable road to the village, no ambulance agreed to drive till her home for two long days leaving the woman critical. Later, her family members prepared a sling on their own and carried the woman to Bolangir District Headquarters Hospital (DHH) on Sunday. But as if it was not bad enough, they found the DHH under power outage upon reaching. Doctors had to treat her with the help of candles and other sources of light. The woman gave birth to a stillborn child.

Following the plight of the woman, her family members blamed the death of the newborn on the power outage as well as the elusive ambulance and demanded stringent action against the guilty.

However, Chief District Medical Officer (CDMO), Bolangir has ruled out any negligence on the part of the doctors due to power outage and claimed that the foetus had died four days ago inside the mother’s womb.