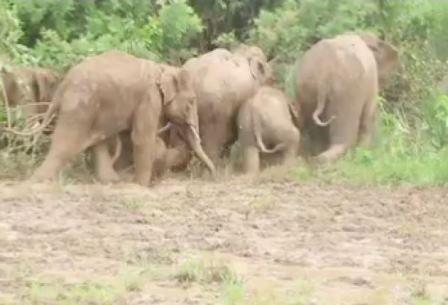 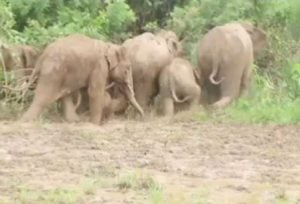 Paralakhemundi: With a herd of elephant sneaking into the villages and frequently destroying paddy crops over the last few days, jumbo menace has started haunting villagers in Gosani block of Gajapati district again.

Areas like Gosani, Soura Sahi, and K Ranipeta in the block have been the worst affected with a herd of elephant frequenting these villages to graze paddy crops after sunset every day. Although no loss of life has been reported so far, paddy fields have been damaged on a large scale due to the incursion of the pachyderms.

“I have noticed a herd of elephants with 7 to 8 elephants entering into the crop fields after sunset every day and feasting on the paddy crops,” said Satyabadi Jena, an affected farmer of the area. He said he had lost a large stretch of cropped farmland to the elephant rampage.

According to an estimate by the villagers, around 40 acres of crops have been destroyed in the recent jumbo incursion while forest officials are yet to find a solution to the problem. Apart from paddy, the herd is also targeting banana and jackfruit trees which are planted close to the homes compelling locals to spend sleepless nights.

Locals are claiming that it is the same herd, which had sneaked into Narayanpur and Debagiri Forest Range of the district from neighbouring Ganjam in May this year and had caused massive crop damage in the area. They have demanded immediate action on the part of the forest officials to keep the elephants at bay.