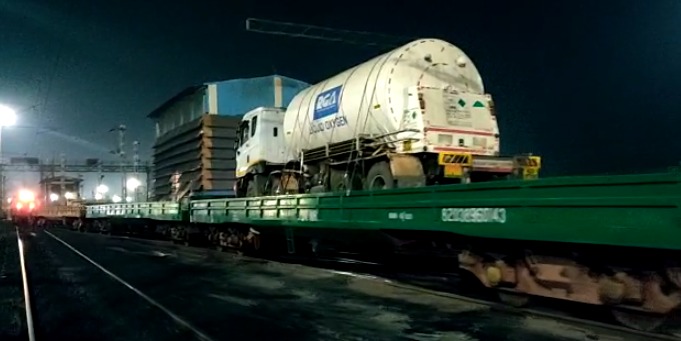 Bhubaneswar: The East Coast Railway has carried 329 tons of Liquid Medical Oxygen (LMO) from different Steel Plants in it’s jurisdiction towards different States like Maharastra, Telengana, Haryana and Delhi and taken it as a challenge to supply Oxygen at the earliest during the current COVID upsurge for saving life of patients.

A total of 187 Ton of LMO has already been transported from Tata Bhusan Siding Angul. Similarly 105 Ton of LMO has been transported from Rashtriya ISpat Nigam Limited, Visakhapatnam and 31 Ton of LMO from Jindal Steel Angul. Different Hospitals in various States are in need of Oxygen on priority basis. Getting requests from Different State Governments, Indian Railway has prepared itself for providing oxygen transportation services to all the states in need. Green corridor has been provided for the faster movement of the Oxygen Express. Indian Railway is ensuring that the medical oxygen is made available to Covid-19 patients across the country through Oxygen Express, thus bringing respite to the needy.

More Empty Liquid Medical Oxygen Tankers from different States are on the way to carry LMO from ECoR jurisdiction. East coast Railway has taken all precautions for safe running of Oxygen Express Special Trains from its jurisdiction and sending these trains at the earliest. Liquid Oxygen being a cryogenic cargo utmost care have been taken about the maximum speed at which it can be carried, maximum acceleration & deceleration.

East Coast Railway General Manager Shri Vidya Bhushan earlier instructed officials to take it as a challenge to supply Oxygen at the earliest during the crisis for life-saving of patients. He has stressed upon proper lashing and packing of the tankers on the rake. ECoR is in full preparedness for providing oxygen transportation services to all the states in need.

Lockdown & Shutdown In Odisha: Covid Vaccination To Continue Except On Sundays