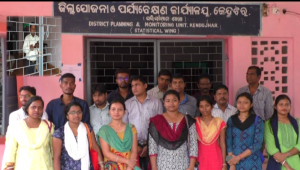 Malik locked the entrance gate of the P&S office at around 10 am this morning triggering an unprecedented situation in the office premises.  Senior staff members of the office requested him to unlock the gate, but all their appeals fell on deaf years.

Thereafter, a group of employees broke open the gate and entered the office which irked the Deputy Director, who picked up a quarrel with fellow staff members including some women.

Later, all the employees of District Statistical Wing called on the District Collector and apprised him about the sequence events since morning.

Talking to Kalinga TV, an employee of District Statistical Wing, Rabindra Naik said, “It is not the first time that the Deputy Director has locked up the office from outside and not allowed the employees to go in. He had done a similar act earlier this week as well.”

Malik has been asked to join at the Directorate of Economics & Statistics, at the capital city of Bhubaneswar.