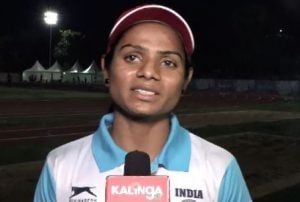 Bhubaneswar:  Ace sprinter Dutee Chand has received an invitation from the International Association of Athletics Federations (IAAF) to participate in the World Athletics Championships in London, despite failing to touch the qualification mark of 11.26 seconds.

The Odia girl got the wild card entry to the mega event since  the necessary  number of 56 athletes for women’s 100m event could not be fulfilled for the World Championships, scheduled to be held in London from August 4 to 13.

“We have got an invite from the IAAF offering a quota entry for Dutee Chand in the women’s 100m race. It’s because the targeted number of athletes in that event (women’s 100m) has not been reached,” Athletics Federation of India (AFI) President Adille Sumariwala said.

“We have been told to reply yes or no within 12 hours and we are accepting it,” he added.

In the 22nd Asian Athletics Championships in Bhubaneswar earlier this month, Dutee won a bronze medal clocking 11.52 seconds, while her best of 11.30 seconds came during the Indian Grand Prix in New Delhi on May 15.

Twenty-one year old Dutee, who had lost all hope of participating in the World Athletics Championships, said , “I am very happy to get a phone call from AFI officials in this regard. I am practicing well. Hope, I’ll get a medal for my country ”.