Dusshera begins with fervour and gaiety in Odisha 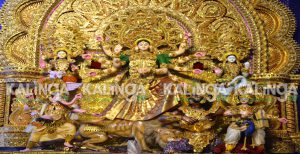 Bhubaneswar: The Dusshera festival began with invocation of the Goddess Durga across Odisha last evening with the “Sasthi Puja”. It is being celebrated with enthusiasm and religious fervour across the state.

Thousands of devotees of all ages have started gathering at different Puja pandals to worship Goddess Durga today.

Beautifully decorated clay idols of Goddess Durga, Saraswati, and Laxmi, as well as Lord Shiva, Kartik and Ganesh are unveiled at various Puja pandals in the state.

The Puja pandals presenting artistic themes, various forms of Goddess Durga, craft-works, and illumination have given a unique dimension altogether . Many pandals have been arranged with different themes in various places including the capital city.

The Dusshera , which marks the victory of Good over Evil, is usually a five-day event with Sasthi and the subsequent four days Saptami, Ashtami, Navami and Dashami.

The festival will come to an end with the immersion of the idols of the Goddess and God in rivers and water bodies across the state on Sunday.