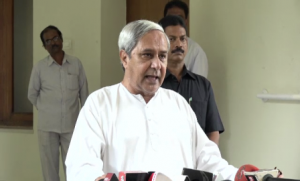 Naveen was answering questions from media persons soon after his return from a five-day New Delhi visit when he claimed that the allegation of BJD accepting funds from illegitimate sources has been made to hurt the clean image of the party “There is no truth in it,” he averred.

The BJD supremo expressed happiness over the overwhelming victory of his party candidate in the recently held Nuapada Zilla Parishad (ZP) election saying winning in the BJP bastion and specifically in the constituency of its State unit president Basant Panda where the saffron party failed to bag even a single seat makes a point. He said it proves that the people in Nuapada have accepted BJD.

Earlier talking to Kalinga TV on his New Delhi visit, Naveen dubbed it as fruitful and said he got an opportunity to meet several Union Ministers, including Women and Child Development Minister Maneka Gandhi and talked on issues pertaining to Odisha’s interest.