Puri: A dreaded criminal identified as Biju Behera got injured in Police encounter on Wednesday in Puri district of Odisha. He has been admitted to hospital. He was involved in an extortion case.

As per reports, last night Biju Behera of Gokhasahi and Kalia Muduli of village Ura under Chandanpur Police limits went to the house of Jitendra Kumar Sahu at Narendrakona, Near ITI College, due to some monetary dispute and allegedly fired gun shot at Jitendra. However his wife Sakuntala Sahu came to the front and as she pushed her husband away, she herself got hit with the bullet.

Injured Sakuntala was then immediately shifted to hospital and she is said to be out of danger.

On the same night the accused persons also went to the house of one Tuni Behera at Matota and assaulted her and her son Kartika Behera causing severe injuries.

After committing both the crimes, the criminals fled away.

One of these teams being led by Inspector BN Sethi, IIC, Kumbharpada got information about the accused Biju Behera hiding in Chandanpur P.S. area jurisdiction. 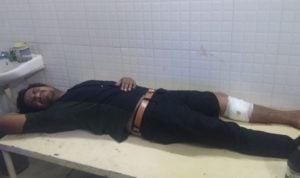 They conducted raid for the apprehension of the accused. On confirmation Police asked him to surrender and tried to apprehend him. However, on seeing the police, the accused fired two rounds on the police team with a view to kill them and to escape from the spot.

Police team in self-defence fired one round. Thereafter, there was tussle between the police team and the accused Biju Behera. Following the tussle, Police team was able to apprehend the accused person from the spot.

It was later ascertained that accused was having bleeding injury in the left leg. The accused was immediately taken into custody and has been shifted to Chandanpur hospital for treatment.

SI Dibya Ranjan Panda of Kumbharpada P.S., who was part of the police team, has also received minor injuries during the tussle.

Also read: Woman critical after being shot during extortion in Puri

Triton EV Model H: This SUV gets a range of 1000 kms, receives orders worth 2.4 billion dollars in India