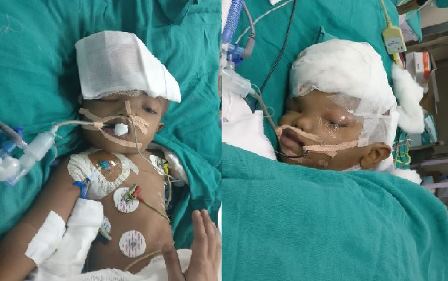 “We thank Odisha Chief Minister Naveen Patnaik for granting Rs 1 core towards the surgery of the conjoined twins Jaga-Balia from the Chief Minister’s Relief Fund,” said Dr. Mohapatra while addressing a press conference here this afternoon.

Dr. Ashok also thanked the Odisha media for reporting and highlighting the issue and thanked the people of the state for their benevolent prayer for the successful surgery of the conjoined twins of Milipada village under Phiringia block in Kandhamal district.

However, Dr Mahapatra admitted that the operation was a great challenge for them.

Besides Dr Mahapatra, 3 Odia doctors Mihir Prakash Pandia, Girija Prasad Rath and Sambhu Nath Das were in the team of doctors that conducted the separation surgery of the conjoined twins Jaga-Kalia.

Both the babies are reportedly stable and have been kept in ICU.

Kalinga TV had highlighted their suffering in November 2016 and then on June 7, 2017 on Kalinga Bandhu programme. Later, other media houses took up the case.

Court issues summons to Sanjay Dutt for remark against Mayawati