Founder of KISS and KIIT Dr Samanta creates a record of being the one with the most Honorary Doctorates in India, as he receives his 50th one from his alma mater, Utkal University 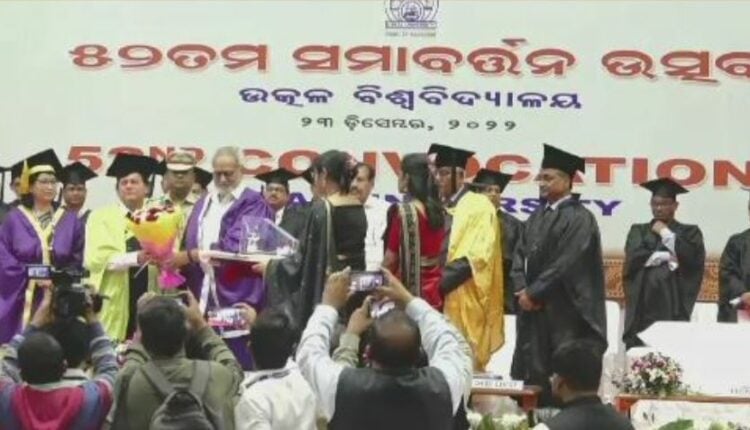 Bhubaneswar: The founder of KIIT and KISS Dr Achyuta Samanta was conferred with his 50th Honorary Doctorate from his alma mater, Utkal University on Friday. With this he set a new record in India by becoming the first man in the country to hold 50 Honorary Doctorates.

It seems losing his father at the age of 4 and struggling for food to now giving food and education to millions, Dr Samanta is born to serve and create records.

Eminent Educationist, social activist, Founder of KIIT & KISS and Lok Sabha MP from Kandhamal Dr. Achyuta Samanta has been conferred the honorary D.Litt degree by Utkal University in recognition of his immense contribution to the field of education and social service. This is the 50th honorary degree conferred on him.

Utkal University, which is also Dr. Samanta’s alma mater, presented the honour to him at its 52nd convocation on 23rd December 2022. He received the degree from the University Chancellor and Governor of Odisha Prof. Ganeshi Lal in the presence of Former Jugde, Supreme Court of India Justice V. Gopala Gowda; Vice Chancellor, Utkal University, Prof. Sabita Acharya and Principal Secretary, Higher Education, Govt of Odisha, Bishnupada Sethi, among others.

Addressing the august gathering, the Governor made a special mention of Dr Samanta while beginning his address and described him as a “leading legend of the convocation”. He said that Dr Samanta embodies key human attributes such as simplicity, humility, gratitude, courage, perseverance, generosity, equanimity, peace and goodness.Dr Samanta expressed his deepest gratitude to the Chancellor for the honour, besides the VC and the University Syndicate. “All are aware of my life dedicated to the service of others. As a recognition of my life, work and accomplishments, I have been conferred many accolades and awards. However, some awards are extra special, like this one. I am elated that Utkal University, my own alma mater is conferring Honorary D.Litt. Degree on me, thereby making it my 50th Honorary Doctorate, the highest for any Indian. I dedicate this award to my hero, my mother, and all her struggles and sacrifice. The Almighty’s blessings and good wishes of the people have helped me reach where I am today. Their wishes continue to give me strength to dream more for the betterment of society,” Dr Samanta said in his comments.

Educationist, Philanthropist and Humanitarian Dr Samanta had done his Post Graduation in Chemistry from Utkal University.