Divyang singer fighting for life at KIMS to get artificial limbs 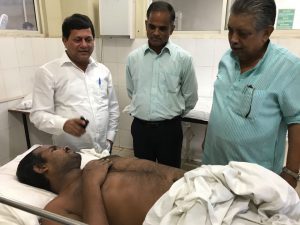 Bhubaneswar: Divyang Singer Dillip Sahu, who has been fighting for his life at Kalinga Instititute of Medical Sciences (KIMS) hospital in the capital city, finally got a ray of hope today, as the Minister for Social Security & Empowerment of Persons with Disabilities, Prafulla Samal announced that the state government would provide him artificial limbs as soon as possible.

The announcement came after the Minister, along with the Principal Secretary, Department of Social Security & Empowerment of Persons with Disabilities, Government of Odisha, Niten Chandra, paid a visit to KIMS hospital to take stock of Dillip’s health on Monday.

32 year old Dillip was admitted at KIMS hospital in a critical condition after a train mishap on July 3.

On the fateful day, the blind singer fell inti the tracks after being pushed by a robber at Balsore railway station while trying to save his mobile phone from him. The train ran over him chopping his left hand and leg adding to his woes.

Initially, he was admitted to the Balasore district headquarters hospital but was later shifted to the SCB Medical College hospital in Cuttack. But as his condition began to worsen, he was shifted to the Bhubaneswar based-KIMS hospital where he is now undergoing treatment.

After coming to know about the financial problems of Dillip, KIMS authorities decided to provide him free treatment.

The Minister and the Secretary complemented KIMS authorities for their selfless service and helping hand towards needy people like Dillip.