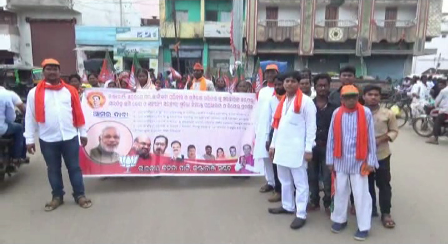 Kantabanji: Hundreds of BJP activists, including women, held a rally and gheraoed the Kantabanji Tehsil office in Balangir district on Friday demanding immediate distribution of land deeds to landless people in the area. The strikers also demanded suitable compensation to those who lost their homes due to heavy rains.

Earlier in the day, BJP activists, led by the party’s Kantabanji circle president Murali Aggarwal, marched in a rally from Indira square to Tehsil office and held a protest meeting there. Demanding land pattas for the landless, the strikers accused the local Tehsildar of not paying heed to their legitimate demands. The agitators submitted a four-point charter of demands to the Tehsildar later in the day.

“We have submitted a four-point charter of demands, which includes allocation of 4 decimal plots to landless under government scheme, compensation to those who have lost homes in the recent rains, inclusion of families with widows under the National Family Welfare Scheme, and daily wage allowance under government provision to those who have lost their homes,” BJP Kantabanji circle president Murali Aggarwal said. “We have submitted memorandum to the Tehsildar three times before today but it has fallen on deaf ears,” he added.

On the other hand, the Kantabanji Tehsildar Subash Chandra Sethia claimed that the agitators have been coming with the same demands time and again over the last three months or so. Land allocation is possible only after checking the eligibility of the applicants and the process is on, he added.