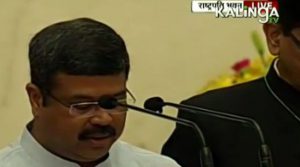 New Delhi: Dharmendra Pradhan’s elevation to cabinet rank and the assignment of the additional portfolio of Skill Development, a crucial component of Prime Minister Narendra Modi’s vision for building a New India, to him is recognition for the great work he has done as the Minister of State (MoS) for Petroleum and Natural Gas (P & NG) ministry in the last three years.

His stewardship of the Petroleum ministry for three years was marked by at least two great success stories. In the first of these two, nearly 10.5 million people opted out of the subsidy regime in LPG under the ‘Give It Up’ scheme, no mean achievement in a country where it is hard to persuade people to give up benefits. The second was the launch of the Ujjwala, an ambitious scheme that aims to provide LPG connections to five crore BPL families by 2019. According to figures released by the PNG ministry in July this year, the ministry has already crossed the half way mark in achieving the target.

Grateful to PM Modi. Working together to make India a leading nation by 2022: Dharmendra Pradhan after he was promoted to cabinet rank pic.twitter.com/rPuuZGaUy2

At the political level too, Dharmendra, the unofficial face of BJP in Odisha, has given his party the kind of standing it never had in the state before, not even when it was in power in alliance with the BJD from 2000 to 2009. The figures speak for themselves. In the zila parishad election in February this year, the saffron party doubled its vote share from a modest 18% in the 2014 general elections to 33%, an incredible rise of 15% that pushed the Congress, the principal opposition party in the state, to the third position for the first time. A large part of the credit for this stupendous performance has to be attributed to Pradhan, who controlled everything from planning election strategy to selecting candidates.

In his role as in charge of the party during the Uttarakhand, he proved his organisational and electoral skills by notching up 56 out of the 70 Assembly seats in the hill state.

Hearty congratulations to Dharmendra Bhai on his elevation to the Cabinet as a member Minister.💐💐💐@dpradhanbjp .

With his elevation to the cabinet rank, Pradhan’s stature has gone up several notches. While he was already being seen as the Chief Ministerial face of the party in Odisha, today’s elevation would give it a formal seal.

That he was cut out for big things was evident since the days when Pradhan started his political career as an activist in ABVP. He rose through the ranks, becoming the national secretary of ABVP and then the head of the Bharatiya Janata Yuva Morcha (BJYM) and a party general secretary.

Whether or not he becomes the Chief Minister in 2019, Pradhan has certainly cemented his position as a key player in politics – both in the state and at the national level – with his sincerity and hard work.