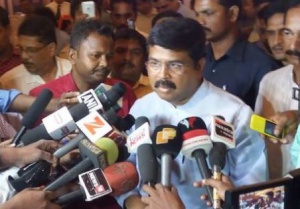 Bhubaneswar: Union Petroleum and Natural Gas Minister Dharmendra Pradhan on Wednesday batted for implementing GST on Petroleum products.
Addressing stakeholders at a GST Outreach Programme in Bhubaneswar, he said it was his desire to also include petroleum products in the GST tax regime. Currently five petroleum products, Natural Gas, Aviation Turbine fuel, High speed diesel, Petroleum crude and motor spirit are exempted from GST.
“July 1 will be a historic day for India. Though it was my desire to also include petroleum products into the GST mechanism, somehow it couldn’t be done. The state representatives didn’t back the step. But it is an emerging mechanism. The GST council will look into it,” the Union Minister said.
The Minister said GST will be beneficial for states like Odisha. “Odisha is a consuming states. GST will be beneficial for such states,” he said.
An exhaustive meeting with stakeholders was organised jointly by State and Central departments.
“In 2005, we shifted from conventional tax system to VAT. This is the first time that an initiative on such a huge platform will take place.”
Among others, Rakesh Sharma, Chief Commissioner, Central Excise, Customs and Service Tax, Bhubaneswar Zone, Commissioner of Commercial Taxes, Government of Odisha, Saswat Mishra and Chief General Manager, IOCL were present.
BhubaneswarDharmendra PradhanGSTOdisha
0
Share
You might also like
State