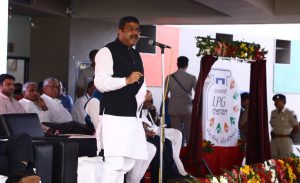 Gandhinagar:  Petroleum and Natural Gas Minister Dharmendra Pradhan on Saturday launched a country-wide PM LPG Panchayat programme here aiming to expedite the distribution of LPG connections in the rural areas across the country.

The PM LPG Panchayat would serve as a backup to the Pradhan Mantri Ujjwala Yojana to distribute LPG connections in the rural areas, the Minister said on the occasion.

One lakh LPG Panchayats will be activated across the country under the Pradhan Mantri Ujjwala Yojana during the next one and a half years, he added.

Launched the #PMLPGPanchayat from #Gujarat; an interactive platform to discuss about safe & sustainable usage of LPG & its benefits. pic.twitter.com/ztZeq78UR7

The idea of this platform is to trigger a discussion through sharing of personal experiences on the benefits of use of clean fuel compared to traditional fuels like cowdung, charcoal or wood.

#PMLPGPanchayat will be a platform for sharing experiences of women’s journey from bio mass to clean energy. pic.twitter.com/uxhSA7jB9v

“Through officials of the oil PSUs, NGOs, Asha workers and social workers, the Panchayat aims to connect with the beneficiaries of the Ujjwala Yojana to resolve issues and wrong beliefs they may have regarding the LPG connection,”  Indian Oil Corporation Executive Director and State-level Coordinator for Oil Industry in Gujarat Sanjeev Jain told media persons.

Currently, the average usage of LPG among the 3 crore beneficiaries of Ujjwala Yojana is around 3 cylinders a year, as against seven-and-a-half cylinders for others. The government wants to increase the number by pushing the scheme aggressively in rural areas, where many people still prefer use of traditional cooking fuel.

India has over 21 crore LPG connections, with 51 per cent reach in the rural areas and nearly 100 per cent penetration across urban centres.