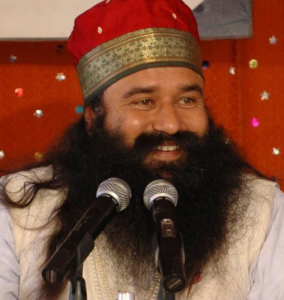 New Delhi: A special CBI court in Panchkula, Haryana found the Dera Sauda chief Gurmeet Ram Rahim Singh guilty of rape on Friday. The quantum of the sentence will be announced on Monday. Ram Rahim has been taken into judicial custody.

Armed forces, around 53 companies of the paramilitary forces and 50,000 personnel of the Haryana Police were deployed in Haryana and Punjab ahead of the judgement on Friday in Panchkula.

The verdict in the case was delivered after 14 years amidst heavy security.  A case of sexual exploitation was registered against the controversial godman in 2002. An anonymous letter was written by a Dera sadhvi to the then Prime Minister Atal Bihari Vajpayee, accusing him of rape.

It was alleged that that he had sexually exploited two ‘sadhvis’. After CBI questioned 18 sadhvis, two sadhvis accused Ram Rahim of raping them.

The trial against Ram Rahim commenced in 2008. He was charged under Section 376 (rape) and Section 506 (criminal intimidation) of the Indian Penal Code on September 6, 2008.

He has also been named in a case of murder of a journalist in 2002 and forced castration of some sadhus in 2014.

Meanwhile, three supporters of the godman were killed in violence that erupted in Panchkula post the conviction of the Dera head. The police has fired in the air, used tear gas and water cannons to disperse the Ram Rahim supporters.

At seven years of age, he was picked out by Shah Satnam Singh, the then head of the Dera Sacha Sauda in Sirsa and was anointed as Ram Rahim.