Depression weakens, but more rains likely in next 24 hours 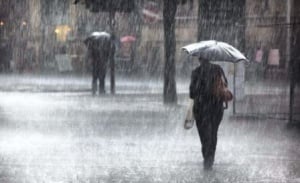 Bhubaneswar: The Indian Meteorological Department (IMD) regional centre here has predicted rain and thundershowers in most parts of Odisha in next 24 hours triggered by a depression formed over coastal Odisha and neighbouring districts. Heavy to very heavy rainfall has also been predicted in one or two places in interior and coastal parts of the State.

According to an IMD bulletin this afternoon, the depression formed over coastal Odisha and neighbouring districts has weakened into a Well-Marked Low Pressure Area. Laying over interior Odisha and neighbouring districts, the depression could trigger strong gusty surface wind from Southeasterly direction in the North Odisha coast and Southwesterly direction in south Odisha coast with speed reaching 45-55 KMPH gusting to 60 KMPH along and off Odisha Coast.

However, storm warning signals have been lowered at all ports in Odisha.

While sea condition would be rough to very rough during this period, the IMD has advised fishermen not to venture into the seas in next 24 hours.