Deeper ties with Myanmar a priority for India: Modi 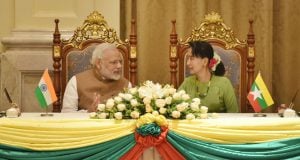 Nay Pyi Taw: Prime Minister Narendra Modi today said deepening relationship with Myanmar is a priority for India as a neighbour and also in the context of Act East Policy.

During his talks with Myanmar’s State Counsellor Aung San Suu Kyi here on Wednesday, Modi said, “It is important to maintain security and stability along the long land and maritime borders of India and Myanmar.”

The Prime Minister also said India stands with Myanmar over the issue of violence in Rakhin,e state which has led to loss of innocent lives.

On the other hand, Suu Kyi thanked India for taking a strong stand on the terror threat that Myanmar faced recently. “India and Myanmar can together ensure that terrorism is not allowed to take root on our soil or on the soil of neighbouring countries,” she said.

Today, India and Myanmar also signed as many as 11 Memorandums of Understanding (MoUs) in a range of sectors, including maritime security cooperation, healthcare, culture, science and technology etc.

Modi arrived here on the second leg of his two-nation trip during which he first travelled Chinese city Xiamen to attend the BRICS summit. This is Modi’s first bilateral visit to Myanmar. He had visited the country in 2014 to attend the ASEAN-India Summit.