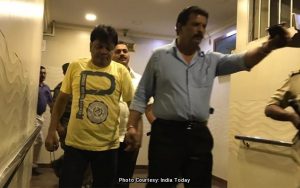 Mumbai: Iqbal Kaskar, the younger brother of India’s most wanted terrorist Dawood Ibrahim, was arrested here last night by the crime branch of Thane Police in connection with an extortion case. The case was filed following a complaint filed by a city -based builder.

Some more arrests are likely as five more persons were detained in connection with the extortion case, according to sources.

Iqbal was taken into custody from his house in Nagpada area in Central Mumbai. The arrest was made by Pradeep Sharma, a former encounter specialist who heads the Anti-Extortion cell of Thane Police.

Iqbal, who was deported from the United Arab Emirates in 2003, is said to be operating his brother’s real estate business in the financial capital of India, the Police said. He was wanted in a murder case and the Sara Sahara illegal construction case. However, he was acquitted in both the cases in 2007.

Dawood, the elder brother of Kaskar, is the mastermind of the 1993 Mumbai serial blasts in which 257 people were killed and over 700 injured. He has been listed as a global terrorist by a committee of the UN Security Council.