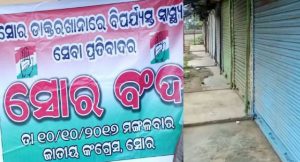 Balasore: Normal life was crippled in Soro town in the district on Tuesday due to a 12-hour bandh called by the Congress party over shortage of doctors and other staff at the Soro Community Health Centre (CHC).

While vehicular traffic came to a grinding halt in Soro area, educational institutions and business establishments remained closed due to the dawn-to-dusk bandh.

Bandh supporters also held a rally and resorted to picketing and staged road blockade in important junctions in the town.

Speaking to Kalinga TV, local Congress leader and former Chairman of Soro Block, Srikanta Jena said, “There are only two doctors in Soro CHC, whereas 10 posts have been sanctioned for the CHC.”

“Health services in our area have been badly affected due to the shortage of doctors and other medical staff in this CHC for a long time.”

The party also called upon the State Government to fill up the posts of physicians and other staff members in the CHC as soon as possible, failing which it threatened to intensify the protest in the days ahead.