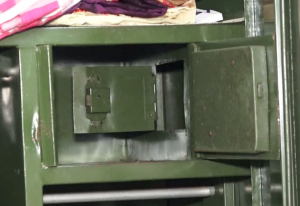 At least seven unidentified dacoits barged into Prafulla Nanda’s house late in the night breaking open the doors and threatened him along with his wife of dire consequences if they raise an alarm. Later on they snatched away a gold necklace from Nanda’s wife Bijaylaxmi after thrashing her brutally with a wooden stick. Bijaylaxmi sustained head injury in the attack. The looters also took away Rs 5,000 kept in the locker of an almirah in the house before fleeing the spot.

Puri Additional SP, City DSP and Baseli Sahi police reached the spot this morning getting information on the dacoity and conducted an investigation with the help of sniffer dog and scientific squad.

The investigation is on in the incident and the details are awaited.