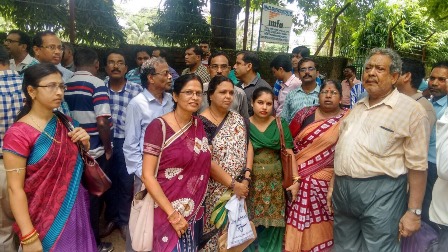 Bhubaneswar: Angry at the inordinate delay in the delivery of flats, customers of Hitech Heaven, a housing project of Hi-Tech Group of Comapnies, gheraoed its corporate office at Saheed Nagar here on Saturday.

The customers expressed their anger at the failure of the company to hand over the flats by June, 2017 as per the last promise it had made.

The flat buyers alleged that this was the fifth time the builder had failed to keep his promise of providing flats. He was originally supposed to deliver the flats in 2014.

“Customers are really angry and very dissatisfied with the progress of the work. The committed month of delivery of June 2017 has already passed and this is the 5th deadline the builder has failed to meet. However, he is again asking for time to deliver the flats which is only a plea to delay the project. This gives us mental agony,” alleged one of the customers.

Hi-Tech Group’s Chairman Tirupati Panigrahi was earlier arrested for having defrauded depositors for crores of rupees with a promise to provide them with land. He was released on bail after paying Rs 63.5 crores as per the order of the Supreme Court.