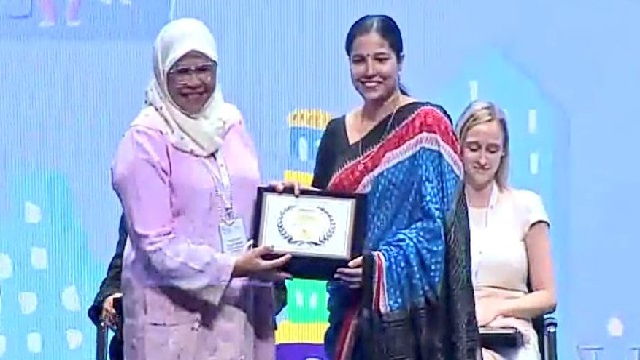 Bhubaneswar: Another achievement and proud moment for Capital Region Urban Transport (CRUT) as Dipti Mahapatro, the General Manager, received yet another International Award the UN-Habitat Scroll of Honour Award 2022. In the ceremony that took place at Global Observance of World Habitat Day in Balikesir, Turkey today which was hosted by the Government of Turkey and UN–Habitat.

Mahapatro received the award for her innovative leadership in turning a failing public- private transport service into inclusive, accessible, cleaner and safer urban mass rapid transit system with transformative impacts especially regarding opportunities provided for women to participate and lead active lives in the city.

“It’s overwhelming to win the award and I would like to thank our State Government and my entire team for their support in making socially inclusive and gender sensitive reforms in the public transport system of the State a reality. Recognitions like these motivates us to come up with new innovations to better serve the society and with a few years remaining to achieve the SDGs, it’s time for catalysing our actions and not just advocating”, said Dipti Mahapatro.

She was awarded for her innovative leadership in turning a failing public-private transport service into inclusive, accessible, cleaner & safer urban mass rapid transit system. Moments from the award ceremony.

Partial unlock in Odisha: Mo Bus services to resume from…

The UN-Habitat Scroll of Honour Award is one of the most prestigious human settlements award in the world. It aims to acknowledge initiatives which have made outstanding contributions that have led to developing and improving human settlements and the quality of urban life to leave no one behind; echoing the Sustainable Development Goals 2030 with emphasis on Goal 11: Sustainable Cities and Communities. The prestigious international award is given for outstanding contributions towards development of human settlements by individuals, organizations and successful projects

CRUT’s comprehensive gender inclusive policies on recruitment of crew, affordable fare structure, integration of smart technologies, sustainable design of depot infrastructure and regular training and capacity building initiatives have been able to create a highly inclusive and sustainable mobility ecosystem in the region. By contributing to several Sustainable Development Goals (SDGs), CRUT has truly been able to go way beyond just being a public transport service provider, to becoming the agent of change responsible for creation of gender sensitive and socially inclusive society that ultimately contributed significantly to the urban development of the region.

Earlier this year, Dipti Mahapatro had won the International Award as Electric Women in Transport 2022. CRUT is actively promoting the usage of the E–Vehicles through its recently launched E–Buses and E–Rickshaws as a step towards a green future.

JioFiber Festival Bonanza: Get benefits worth up to Rs 4500 on booking these JioFiber plans

6 killed, 15 injured in bus-truck collision in UP district