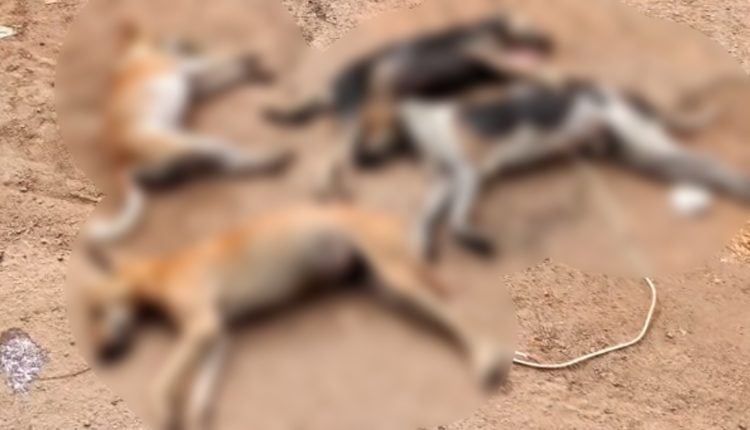 Cuttack: In exhibition of cruelty, a man allegedly poisoned about 5 stray dogs to death on Wednesday in Cuttack district of Odisha. The fateful incident took place in Shankarpur area of Choudwar in the district. As per the locals the said man has so far killed about 20 dogs including these five, so far in the same way.

As per reports, the man allegedly mixed ‘danadar’ poison in a food item and fed it to dogs for which about 5 dogs were killed today. It is said that there are many stray dogs seen in this area. The dogs were allegedly often entering to his house and defecating on the chulha that had been erected in the veranda.

Accordingly, the man thought of a plan to get rid of the strays. He allegedly mixed a poison called ‘danadar’ in ‘gulgula’ (a food item) and gave it to the dogs to eat.

After consuming the poisoned gulgula, the dogs vomited. Today morning all these 5 dogs were found lying dead.

According to the locals the said man has so far poisoned to death about 20 stray dogs including these five today.

While a pal of gloom has descended in the area following death of the dogs, animal lovers have criticised the incident. The locals have filed a complaint against the man in the Police station in this regard.

It is to be noted that in Odisha only, a few days back some people had performed the last rites of a dog, following its death in Bhadrak area as though it was a stray dog, they all loved it like a pet.

Odisha: Central IT raid in Padampur, 3 businessmen under…