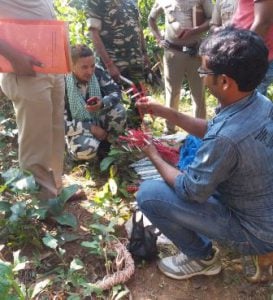 Keonjhar: In a major success to police against ultras in the district, the Central Reserve Police Force (CRPF) personnel seized huge cache of Maoist booty including explosives raiding the Kendu Panduli forest area on Wednesday.

A team of CRPF 264 Batallion came across a Maoist camp in the forest during combing operation and raided it last night. Though ultras managed to give police a slip, they left behind at least three tiffin bombs, 38 gelatin sticks, 35 detonators, 10 gun powder packets, wires used in explosion, explosive bolts and tins. The materials were seized after examination by police.

Notably, a major combing operation by CRPF is underway in the Joda area since Tuesday.