Kendrapara: A crocodile hatchling has been rescued from Derabis area in Kendrapara district of Odisha on Friday. Later, the reptile was reportedly handed over to Nandankanan Zoo for better care.

As per reports, the crocodile (ghadial) hatchling is 82 cm in length and weights 780 gram. It was rescued from Derabis area under Mahakalpda Range in Rajnagar Wild Life Division. 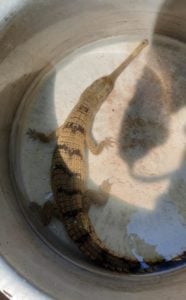 The hatchling was later handover by the Forest Department staff to Nandankanan Zoo in Bhubaneswar for better care and observations.

This is reportedly the third case of crocodile hatchling rescue in this season. After flood season in November next course of action to release in suitable habitat will be done.