Court defers framing of charges against Abdur Rehman till Aug 10 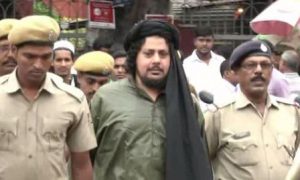 Cuttack: The Cuttack District and Sessions Judge Court today deferred the framing of charges against Al Qaeda in the Indian Subcontinent (AQIS) terror suspect Abdur Rehman till August 10 this year after the accused was presented before it Monday afternoon. The court deferred the framing of charges in view of a petition filed by the accused in the case.

The cleric Rehman, allegedly owing allegiance to AQIS, was brought from the Choudwar Central Jail earlier in the day amid tight security for deposition in the court. However, during the hearing, Rehman’s counsel Satyanarayan Mulia sought a copy of the statements recorded by the two witnesses in the case under Section 164 of IPC from the honourable court for which a petition has already been pending with it. On hearing the petition, the court scheduled the issuance of the directive on it for July 26.

During the hearing today, Rehman told the court that he had been denied Islamic religious texts inside the prison and is not being given medicines which he needs as a diabetic.

The court ordered the Choudwar jail authorities to make necessary arrangements to provide the undertrial with non-disputed religious texts as well as diabetes medicines as per the jail manual.