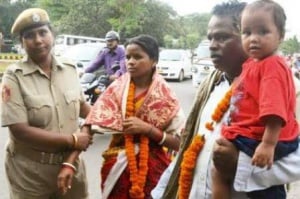 Bhubaneswar: Goura Chandra Bhosagar and his wife Sibani, who walked more than 400 kms on foot to meet Chief Minister Naveen Patnaik seeking ban on liquor in Khuntpali Gram Panchayat of Bargarh district, were barred by the police from meeting the CM on Saturday.

According to reports, the couple staged demonstration in the Lower PMG soon after arriving in the city. Later, while they were marching towards Naveen Nivas, the residence of Patnaik to put forth their grievance and submit a memorandum to stop manufacturing and sale of liquor in their area, were prevented by the Airfield Police.

The determined couple along with their 2-year-old daughter Lejinarani had begun their journey from Bargarh on April 14 after they were allegedly harassed by some Excise officials in their village.

Sibani, a former Naib Sarapanch, and her husband, a daily wage labourer, were supporting anti-liquor campaigns in her area owing which her house was raided by the Exercise officials in the first week of this month on charges of selling liquor at their house.

Protesting the raid, the couple had submitted a memorandum to the District Collector seeking action in this regard, but in vain.

Protesting police inaction and demanding a ban on liquor in their locality, the couple began their journey to meet the CM. On their way to the Capital city, they were supported and lauded by many people and organizations at different places. Unfortunately, in Bhubaneswar, they were not allowed to meet the CM even walking more than 400 km for a social cause.