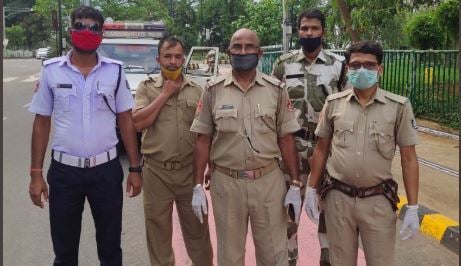 Bhubaneswar: Police personnel saved life of a man who had become unconscious inside his car at the AG square in the capital city of Odisha during lock down.

As per reports, a man fell unconscious in his vehicle on Tuesday when he was crossing AG square. Knowing about this, IIC of Capital Police Station, staff of PCR No. 2 and Traffic personnel rushed to the spot and rescued the victim after breaking the window glass of the vehicle. He was immediately shifted to Capital hospital.

The person has been identified as a Senior functionary of Sulabh International.

Commissionerate Police posted the matter on Twitter and commended prompt action of the cops.

Prompt action by IIC Capital PS, PCR No. 2 & Traffic personnel saved the life of a Senior functionary of Sulabh International, who had become unconscious inside his car in AG Crossing. They spotted, broke open window glass & took him to hospital. Well done. @SarangiSudhansu https://t.co/v4dnvBxleH