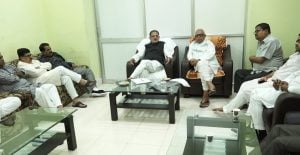 Bhubaneswar: Congress legislators held a meeting at the official residence of Leader of Opposition Narsingha Mishra here in connection to the presidential poll scheduled to be held tomorrow.

During the meeting, the leaders of the Congress party discussed in detail how to cast their vote properly on the Presidential poll.

Talking to media persons, Mishra said, “Out of the 16 MLAs of our party in the state assembly, one legislator, who has been getting treatment for cancer in Mumbai, will not be able to cast his vote on the Presidential election on July 17.  The rest 15 MLAs will vote in favour of Meira Kumar”.

“I have also talked to CPM leaders and an Independent legislator to support the UPA candidate”, he added.