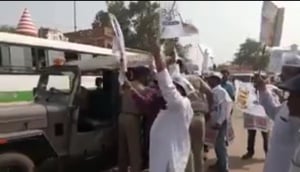 In order to maintain law and order in Bargarh, several Congress and AAP workers are being  detained as a precautionary measure, police said.

Various political parties and farmer organisations across the country are protesting against Shivraj Singh Chouhan Government over the death of farmers in police firing in Mandsuar in Madhaya Pradesh.

Chouhan is scheduled to reach Bargarh on board a helicopter from Chhattisgarh at around 12:15 today.