The booklet contains all the details that is required in order to enjoy both the matches in the Hockey World Cup 2023 and the .FEST 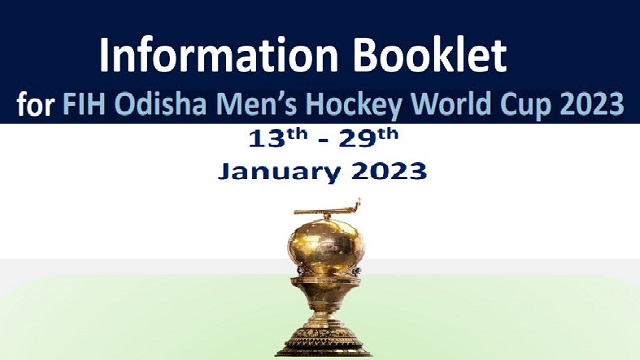 The booklet contains all the details that is required in order to enjoy both the matches in the Hockey World Cup 2023 and the .FEST which is scheduled to take place in Bhubaneswar.

The Commissionerate police has launched a WhatsApp helpline number for FIH Hockey World Cup on ‘7377770070’ and an assistant called ‘Polly’. The Helpline number shall give details on all events and traffic-related information.

It is noteworthy that, FIH Odisha Hockey Men’s World Cup 2023 will start tomorrow. Odisha is the host to the hockey matches this year. The World Cup matches are scheduled to be played in Bhubaneswar and Rourkela from January 12, 2023

After the Indian team, the Netherlands team has arrived at Biju Patnaik International Airport in Bhubaneswar today. In the 2018 edition of Men’s World Cup team Netherlands were the silver medalists. It is noteworthy that, team Netherlands has won the Men’s Hockey World Cup three times till date.

It is worth mentioning that the Netherlands team is placed in Pool C along with Malaysia, New Zealand and Chile.

CLICK ON THIS LINK TO VIEW THE INFORMATION BOOKLET

These small girls from Odisha seek help as their parents abandoned them: Watch

Shehzada Trailer Out! Kartik Aaryan is back with action, humour, and drama