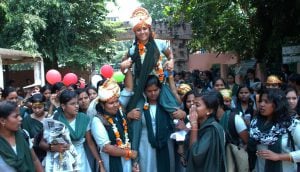 Bhubaneswar: The Higher Education Department, Government of Odisha, on Friday announced the schedule for the students’ union elections in various colleges and universities across the State.

The ‘What I stand for’ meeting will be held on September 22.

Talking to Kalinga TV, Odisha NSUI President, Itish Pradhan said, “The Naveen government must ensure the J M Lyngdoh Committee’s recommendations for free and fair election are observed in all the colleges and universities across the state”.