Close shave for passengers after train derails near Nalada 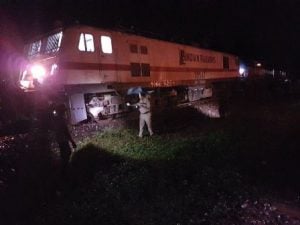 Keonjhar: Hundreds of passengers had a close shave on Monday night as the Tatanagar-Barbil passenger train derailed near Nalda in the district. While the engine of the vehicle suffered minor damage, coaches remained largely intact averting a big mishap.

The incident occurred late in the night on Monday while the passenger train was on its way to Barbil carrying commuters from Tatanagar area in Jharkhand. Going by information given by the passengers on board the train they heard a strange sound just before the derailment at Nalda and alighted from the train in fear. They later found the engines of the vehicle derailed from the tracks.

Local people swung into action immediately after the incident and rescued passengers from the train. Barbil police helped the locals in their effort and arranged hassle-free passage of the people on board the ill-fated train.

Police has lodged a case in the matter and is trying to ascertain the cause behind the derailment.