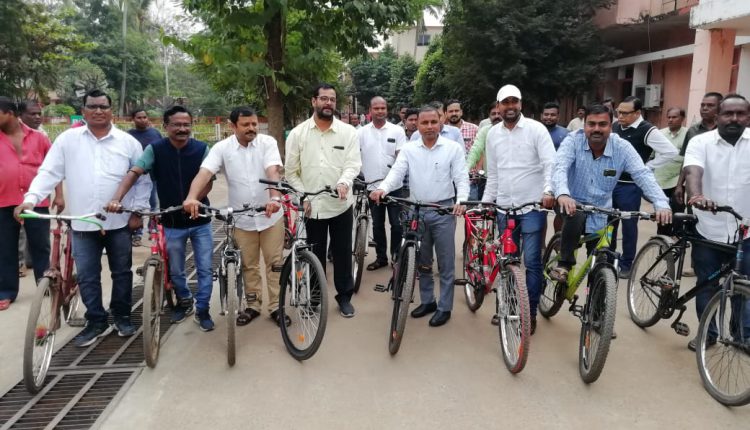 More than 1500 employees of the three city-based organizations, who used to come office by cars or bike, took the green initiative head-on and reached offices on cycle. And, those living on the outskirts of the city used public transport to reach their work stations.

Leading from the front, Prem Chandra Chaudhary, Commissioner and Vice-Chairman of BMC, BDA and Chief Executive Officer of Bhubaneswar Smart City Limited, reached BMC office on cycle and lauded everyone for taking the initiative to promote the non-motorized transport in the city.

“Today, more than 1500 employees of the three institutions (BMC, BDA & BSCL) have used cycles to reach office and this number will go up in the future, which will definitely bring back the habit for cycling among people,” said the BMC Commissioner, who is also a passionate cyclist.

The city authorities want to keep its employees healthy and also ensure traffic flows smoothly in the city.

In a related initiative, the Bhubaneswar Development Authority (BDA) has made Public Bicycle Sharing (PBS) mandatory for all housing projects in order to promote non-motorized transport (NMT) for a clean city environment. The Building Plan Committee of the development authority had also decided that the provision for the dedicated cycle tracks should be an integral part of planning.

The city has already taken several measures including Patha Utsav (street festival) on Janpath to promote non-motorised transport and ensuring healthy and better lifestyle for the citizens.

Recently, the Odisha Pollution Control Board, in its report, had stated that cities like Bhubaneswar, Cuttack, Rourkela, Balasore, Angul and Talcher witnessed a significant rise in pollution levels due to increase in motor vehicle, unplanned urbanisation, industrial and agricultural activities.

According to the statistics of Regional Transport Office (RTO) the Capital city has 14 lakh vehicles against a population of 10 lakh.

The State Government has initiated work on developing a low-carbon mobility plan (LCMP) for Bhubaneswar. The Housing and Urban Development Department and BDA in cooperation with German Development Corporation (GIZ) are jointly working on the LCMP project for the city.

Odisha: Man Trying To Save Road Mishap Victim Gets Hit By Truck, Dies