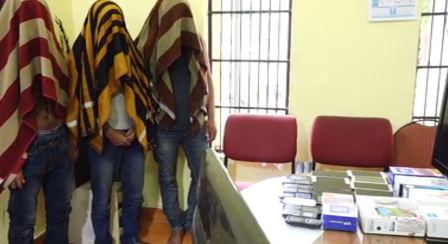 Bhubaneswar: Commissionerate Police conducted raids at different places and busted an intra-state robbers’ gang and arrested three persons, including the ring leader of the gang.

Twenty seven mobile phones and LED TVs, two bikes and other electronic items were recovered from the robbers.

According to police sources, the accused are members of a big intra-state gang and are involved in several robbery cases.

DCP Satyabrata Bhoi said that with the arrest of the trio, all members of the gang have been arrested. However, investigation is on to find out whether any other persons are involved.

The gang, which was active in various districts such as Kendrapara, Jajpur among others used to rob different houses by tying up the house owners.