Bhubaneswar: Worried of standing in long queue in a shopping mall! Yes, all of us must have faced this thing as while shopping time is even less the billing time often exceeds considerable time putting elders and parents with little kids in great distress. But a group of students from Silicon Institute of Technology (SIT), Bhubaneswar, has an answer to this ordeal.

Suchismita Sahu, Anurag Mohanty, Asutosh Senapati and Achieve Pattanaik of SIT in their proposal “Smart billing trolley’’ or “Smart Cart’’ today at the City Changer Lab presented that through RFID tagging and use of information technology (IT) tools shoppers can make their items scanned in the trolley itself so that it would lessen the waiting time considerably in the billing areas. If the customer can take its mobile option then even he/she can pay online and with the same RFID check at the exit goes out of the mall.

Speaking about their projects the students of SIT also added that with a lots of suggestions and pruning the model can also take ideas like auto debit facility we come across in Metro Railway stations so that customers could have easy purchase, billing and exit and under the surveillance as the “Smart Cart’’ will be equipped with RFID sensors.

Another interesting SIT project was “Biometric EVM’’ in which the team presented a finger print enabled electronic voting machine which could address multiple issues of EVM complaints like tampering, multiple votes with fingerprint as an ID. It could also help a voter to caste the vote anywhere in future but keep the identity intact as fingerprint of a person is unique and person specific. 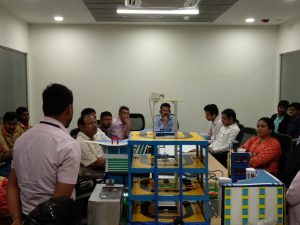 These two were not the only projects at the two-day City Changer Lab event at the Bhuabaneswar Smart City Limited’s (BSCL) office, but 19 other interesting ideas by college students and various institutions came for discussion and presentation as this year it was the third edition of City Changer Lab happened under the Socially Smart Project jointly undertaken by BSCL, Bhubaneswar Municipal Corporation and United Nations Population Fund (UNFPA).

BMC To Impose Penalty for Open Defecation And Urination