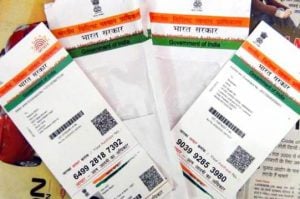 New Delhi:  The Centre will extend the deadline for making Aadhar card mandatory to avail the benefits of various government welfare schemes to December 31. The earlier deadline was September 30.

Attorney General K K Venugopal informed the Supreme Court about the government decision to extend the deadline this morning after which the apex court said it would start hearing the petitions in the Aadhar-related matters in the first week of November.  A bench headed by Chief Justice Dipak Misra said there was no urgency to hear the matter after the AG told the bench that the Centre will extend the deadline to December 31.

The Centre had already extended the deadline once earlier – from June 30 to Sep 30 – for people to get Aadhar cards for themselves to continue availing the benefits of the welfare schemes.

The SC on August 29 had stated that it would first go through the crucial judgement on privacy after a  nine-judge constitution bench ruled that privacy is a fundamental right, subject to reasonable restrictions on Aug 24.