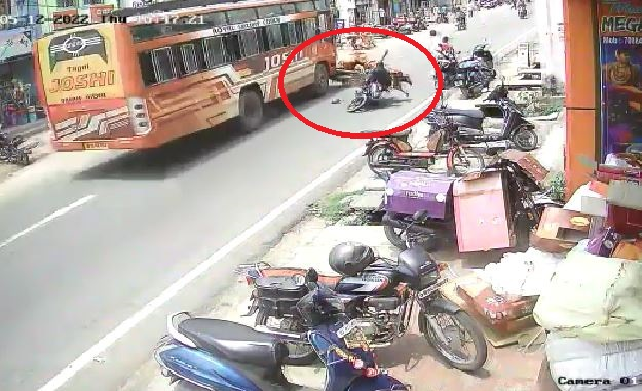 Nayagarh: The CCTV footage of the horrendous bus-bike accident that claimed life of a youth on May 12 in Nayagarh town of Odisha has surfaced. Things have changed after coming up of the footage.

As per reports, a road mishap took place in front of the Collector’s office in Nayagarh town on May 12. Then, it was discussed that a private bus hit the bike from rear for which 2 persons sustained injury.

The injured persons were then admitted to Nayagarh District Headquarter Hospital for treatment. However, one of them reportedly died in the hospital while undergoing treatment.

The deceased has been identified as Manas Nayak of Odagan area. He was on the bike along with his mother in law.

However, today the live visual of the accident that had been caged in a CCTV has surfaced.  After coming up of this CCTV footage the accident has taken a twist. As per the CCTV footage, the bike rider was trying to overtake the bus when it hit another bike that was coming from the opposite side. Resultantly, Manas thrown away from his bike and came under the wheels of the bus.

Following the incident, Nayagarh Police have detained the bus driver and seized the bus. The footage is going viral.